Coastal saltpans are man-made habitats exploited for the extraction of salt, by solar and wind evaporation of seawater in a series of shallow interconnected evaporation ponds varying in size, water depth and separated by dykes. When the intertidal flats are no longer available as the tide advances, shorebirds congregate in dense flocks at the saltpans and most remain until the receding tide exposes their feeding grounds once again. The different salinities and fluvial dynamics in the ponds originate a particularly high benthic invertebrate prey density for shorebirds. During migratory periods, shorebirds can opportunistically exploit this food source and rapidly rebuild their fat stores and pursue their journey. The dry areas in the saltpans such as the dykes between ponds, islands, pond margins, ponds floor or walls are used by ground-nesting waterbird species to breed in mixed colonies.

The saltpans of the Tagus estuary were until the early 70’s, the main salt producer in Portugal. Saltpans surrounded the entire estuary arch and today only two saltpans continue producing salt and both in the complex of Samouco saltpans. Located on the south bank of the Tagus estuary (38°44’N, 8°59’W) the Samouco complex with 360 ha, is formed by several saltpans and their respective ponds. In addition to the ponds, there is an intricate system of ditches, which supply the ponds with water from the estuary. The abandonment and degradation of most ponds provided the invasion of halophyte vegetation, which is subject to the tides, giving rise to marsh patches.

The great specificity of the dominant biotopes in the complex, dune formations and salinized areas, confer a reduced floristic diversity to the area. Both the dune cord and the slopes of the ditches and the bunds of the salt marshes, show a relative abundance of Sarcocornia fruticosa, Halimione portulacoides, species that demonstrate adaptive structures to high salinity and soil moisture, and Armeria pinifolia, endemic to Portugal.

The mammal communities in the complex are heavily depraved, as a result of the intense human occupation, the existence of roads and urban structures, which confers the character of “island” to this area. Thus, it is not surprising that small mammals predominate, such Mus spretus, Rattus norvegicus, but also the Oryctolagus cunninculus, Mustela nivalis and even Vulpes vulpes. The low vegetation cover and the high salinity contribute to the low specific richness and low density of the herpetofauna. However, the existence of agricultural fields on the outskirts of the complex provides for the occurrence of some species of amphibians and reptiles, such Bufo bufo, Lacerda lepida, Malpolon monspessulanus and Rana perezi.

The saltpans complex is managed for waterbird conservation by Samouco Foundation and are included in the special protection area of the Tagus estuary. This saltpans complex is the main high-tide roost for shorebirds using the estuary during the migratory periods, when 60–80% of all shorebirds passing through the Tagus estuary stay in this area (10,000 birds on average). During the breeding season the complex is the main breeding ground for the Kentish plover (Charadrius alexandrinus), Black-winged stilt (Himantopus himantopus) and Little tern (Sternula albifrons) in Tagus estuary.

The breeding population of Kentish plover have a mean of 56 pairs (range: 29 pairs in 2009 to 76 pairs in 2011). In the complex, Kentish plover breeds in three major areas: saltpans of Brito and Canto, with 9.4 and 12.8 ha (active saltpans) respectively, and Providência saltpan, with 17.4 ha (no longer active but are managed for waterbirds, with regular control of the vegetation and water levels). The first nests are found in the end of March, and the peak of breeding activity occurs from mid-May to mid-June, (43 % of nests) and the last nests are found in July. Most of the clutches are located along the paths between pans (70 %). The mean annual nest success of Kentish plover is 25 %, however very variable over the years (range: 4 – 50 %). Nest predation in the complex of Samouco saltpans is high, birds as Corvus corone and Pica pica are responsible for most predation (58%), followed by the mammals Vulpes vulpes and Rattus norvegicus (33%). As in other areas along the European coast, the breeding population of Kentish plover in Samouco saltpans is declining. 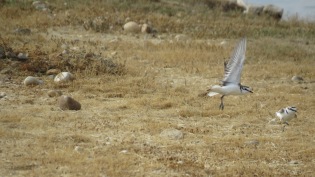